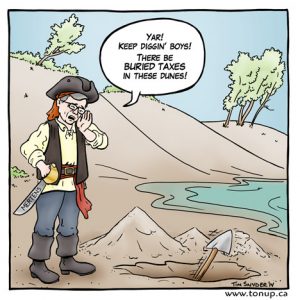 Mayor Mertens thinks there is treasure hidden in the dunes of Sandbanks Provincial Park in the form of lost tax revenue. Seems the park, a provincial entity, may not be paying it’s fair share. It certainly seems like it’s more interested in expanding within it’s own borders than in helping to maintain the roads surrounding and leading to it.

This cartoon was originally published in The Wellington Times, August 20, 2014.