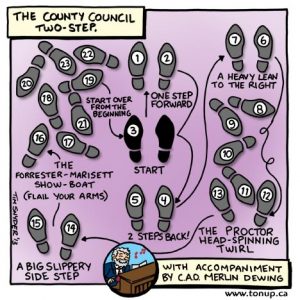 Our local Council has a funny way of coming to a decision on various matters. Almost like a dance. Like dancing buffalo in a quaint tea shop, where every day is groundhog day, and the more things are torn down and destroyed, the more they stay the same.

This cartoon was originally published in The Wellington Times, September 11, 2013. 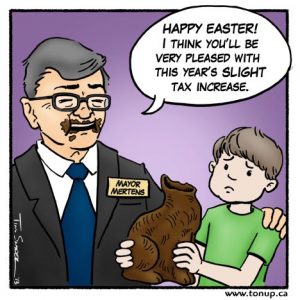 While it is touted as the lowest tax increase in a long while, it remains a tax increase. And I know that elected officials almost always campaign on the idea of no tax increases, but, here we are. With a tax increase. Hands up those of you who have received an equal or greater than pay increase!

This cartoon was originally published in The Wellington Times, March 27, 2013. 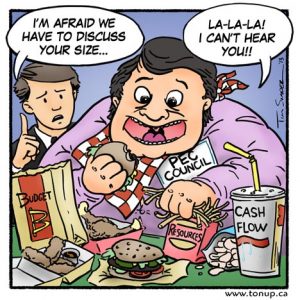 We have 15 councillors in Prince Edward County. 15. Plus the Mayor. That’s for a population of about 25,000. For a minute forget about the budget implications, and imagine what it’s like trying to get them all to agree on anything? In 2010 80% of returned ballots agreed that Council size was an issue. What have we done about it since then?

This cartoon was originally published in The Wellington Times, March 20, 2013. 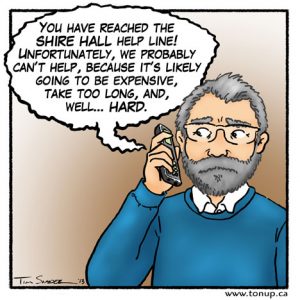 Sometimes I’m a bit hard on our municipal government, but sometimes it’s just so frustrating. I’ve also painted with a rather large brush with this cartoon,and I should say there are piles and piles of competent and really helpful people at the hall. In retrospect I should maybe have used ‘council’ in place of ‘Shire Hall’.

This cartoon was originally published in The Wellington Times, February 20, 2013.