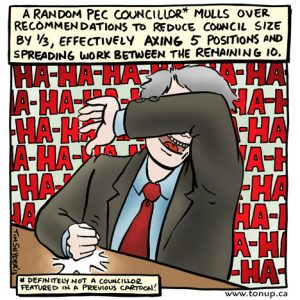 Ok, so I’m being a little cynical here. It is quite possible that the Prince Edward County Council will decide to follow the Citizens’ Assembly recommendation and trim their numbers down from 15 members to 10. (plus the Mayor, who would henceforth be known as “The Tiebreaker”.) Let’s say they say they say, “yes”. What then? How will they make it happen? Will they function more cohesively?  Will Wards change, and would it really matter if they did? Far more questions here than answers I’m afraid.

Oh, and the little side note here, *definitely not a councillor featured in a previous cartoon! – is just a nod to a certain councillor that stopped in to introduce herself to me. She seemed nice so I decided to leave her out of this week’s cartoon. Everybody gets one!

This cartoon was originally published in The Wellington Times, September 18, 2013.