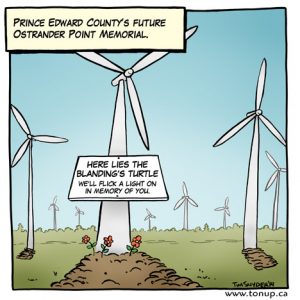 Although they may appeal the appeal, the Prince Edward Field Naturalists have lost their recent court battle to keep industrial wind turbines out of South Marysburgh. This ruling may open the floodgates to hundreds of turbines along the southern shore of the county and the eastern end of Lake Ontario. An initial ruling had stopped plans for turbines in the endangered blanding’s turtles’ turf.

This cartoon was originally published in The Wellington Times, February 26, 2014.